An Introduction to Climate Change.

There is a village in Fiji, named Vunidogoloa. Located on an island, this village has been struggling for years from reoccurring flooding due to rising sea levels. Global mean sea levels have risen 8-9 inches since 1880 and as a result, this village was forced to relocate in 2014. Why are the sea levels rising? Glaciers such as Antarctica and Greenland are melting, placing more water in the oceans. The root cause has to do with climate change and the real threats it poses to humans, wildlife and the entire planet. 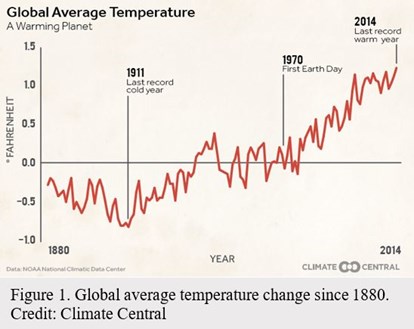 What is climate change? Climate change and global warming are often used interchangeably but they actually refer to two slightly different phenomenon. Global warming refers to the long-term increase in the earth’s temperature since the industrial revolution due to the release greenhouse gases from burning fossil fuel (Figure 1). Climate change, on the other hand, is the gradual change in the temperature of the earth AND the changes in extremes weather events that go along with it. Across the globe we are already witnessing the effects of climate change.

The story of Vunidogoloa might seem like an isolated example, but the fact is this could be a reality for many coastal cities and villages around the world in the near future. According to a recent study, 300 million people living in coastal regions will experience flooding at least once every year by 2050 due to the sea level rise. Further, besides the rise in sea level, climate change is also amplifying other environmental extremes such as forest fires, droughts, and hurricanes. While in Canada, an increase in forest fire frequency and intensity are expected, African countries, on the other hand, will suffer from severe droughts and flooding events. According to a World Bank prediction, as many as 143 million people could become climate change migrants in the developing world by 2050.

In face of this dreadful reality, however, our past experiences in solving environmental issues demonstrate that humanity is more than capable of solving an issue like climate change. Let us, therefore, consider the story of the ozone depletion and recovery to draw some inspiration in tackling the fight against climate change.

The Power of Collective Action: Story of Ozone Depletion

The year was 1974 when the first major scientific paper describing ozone depletion was published. Rowland and Molina, two scientists working at University of California, had just discovered that a class of chemicals called Chlorofluorocarbons (CFCs) was destroying Earth’s protective ozone layer at an alarming rate. Found in common household items ranging from hairsprays to refrigerators, CFCs were destroying the very layer that protects humans and life on Earth by blocking harmful UV rays coming from the Sun. The loss of the ozone layer meant that there would be an increased risk of skin cancer, eye cataracts, loss of plant species and reduction in global food supply. As a result, upon its discovery, Ozone depletion very quickly became a topic of international concern, covered extensively in the media. Once an issue of mammoth importance however, it is largely absent in today’s public discourse. What became of it?

The catastrophic potential of ozone depletion inspired public action long before any international or governmental actions took place. In America, people voluntarily switched from using products contained CFCs, such as hair sprays, to products without CFCs, causing a 50% decline in their sales even before any legislation was enacted. Internationally, under Canada’s leadership, the world governments agreed to eliminate CFCs via an agreement called Montreal Protocol. As a result of these collective efforts, scientists have predicted a full recovery of the ozone layer by 2060. This success story, involving public and international partnerships, speaks to our current existential crisis and how we can all work together to reduce climate change.

What Can We Do To Reduce Human Caused Climate Change?

Collective action is the most effective tool in fighting overarching environmental issues and the first requirement for this action is common knowledge. The attempt of this blog series is to increase literacy surrounding climate change. It will cover topics ranging from climate skepticism to its effects on our ecosystems, communities, and biodiversity. At the end, each blog post will provide a tip on how to reduce your personal greenhouse gas emissions.

For example, food consumed by Canadians have to travel a long distance before making their way onto our dining tables. Red grapes are often produced in California and have to travel well over a thousand kilometers to be consumed, in Edmonton. The entire shipping process produces a lot of greenhouse gases which contributes to climate change. You can help reduce this food related carbon emissions by switching to locally produced food, like apples or pears. Being produced locally, these foods do not need to travel hundreds of kilometers before reaching your dining table, and your purchases will also support your local economy!