With COVID-19 on all our minds, we are going to explore an earlier virus that appeared in Africa, then moved around the world; West Nile Virus (WNV). The WNV was first isolated in Uganda in 1937 and first detected in North America in 1999. Later that year 62 cases of WNV infection were found in New York City. The first human case of WNV in Canada was discovered in Ontario in 2002.

Eight out of 10 people with WNV do not develop any symptoms. About 1 in 150 people who are infected can develop serious illness like encephalitis. Those above 60 and those with underlying medical conditions are at greater risk of developing a severe illness from WNV. 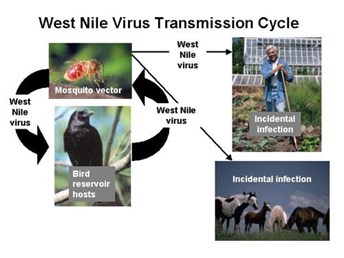 This vector-borne pathogen also infects birds and other animals. Wild birds such as ducks and pigeons are the main host for the virus while mosquitos are the main vector source that spread this disease. Mosquitoes become infected with this virus after biting infected birds and spread it further by biting uninfected birds. Birds of prey and scavengers may also become infected by eating a sick bird. While many species are usually asymptomatic, the virus can cause severe symptoms which may kill some species like Jays and Crows.

In this blog, we will explore the impact of climate change on West Nile Virus. We will also look at how it might change the spread and distribution of viruses.

In 2018, a total of 432 human cases of WNV infections were confirmed in Canada. The numbers change from year to year following cycles of mosquito populations and prevalence of the virus in hosts. One recent outbreak of WNV took place in southern Alberta in 2018. The outbreak’s epicenter was near the Alberta Birds of Prey Foundation in Coaldale. The center lost 15 birds to the WNV. The foundation believed that stagnant pools of water near their facility was the 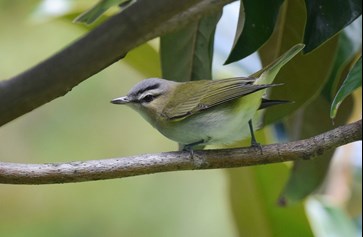 source of the mosquitoes that caused the outbreak.

Impact of WNV on wild birds is more widespread than previously thought. In one study, scientists used 16 years of ‘Monitoring Avian Productivity and Survivorship’ data to determine the impact of WNV on wild birds in North America. They studied a total of 49 species and found that 23 species experience significant population declines due to WNV. The population of Red-eyed Vireos, for example, decline by over 30 million. While many species recovered to pre-WNV numbers, many other species are still struggling and their recovery lags behind.

Occurrence of vector borne diseases like WNV is determined by existence of infected hosts and vector mosquitos, those that spread the disease further. Changing climate has a direct and an indirect influence on these two factors. Take vector populations for example; increasing temperatures cause an increase in mosquito populations which can increase the transmission rate of WNV. For instance, in Canadian prairies the mosquito species Culex tarsalis is the main vector for WNV. This species thrives at temperatures between 14 and 35 degrees Celsius. Research shows that as the average surface temperature increases further, the development rate of mosquitoes will be faster. As a result, the rate of WNV infection in southern parts of the Canadian prairies is expected to increase. In one study conducted across 17 states in USA, scientists found that an increase of 5 degree Celsius in mean maximum weekly temperature resulted in 32% - 50% increase in cases of WNV infection in humans. Further, the range and distribution of WNV will also expand northwards in Canadian prairies as the grassland habitats and the vector mosquitoes shift further north due to climate change.

However, the average summer precipitation is projected to decrease in southern-Canada toward the end of 21st century. The region will also experience more droughts due to climate change. Droughts can cause drying of wetlands, which may decrease mosquito populations, thus reducing the likelihood of WNV outbreaks.

What Can You Do?

You can reduce your carbon footprint by simply consuming less. If you need to use a product, try making it at home, or borrow it from a friend instead.  Or, check out your local used store like Value Village or Goodwill. If you do buy at item and no longer need it, donate it to a reuse center so it can be use by someone else. As well, reduce the number of single use items you use to reduce the amount of garbage that is being thrown away.

Other helpful tips on how to reduce your carbon footprint can be found here.

Centre for Disease Control and Prevention, accessed on June 28, 2020, retrieved from https://commons.wikimedia.org/wiki/File:West_Nile_virus_transmission_cycle.jpg